How Fast Can EZfeed Pay for Itself? [Case Study] 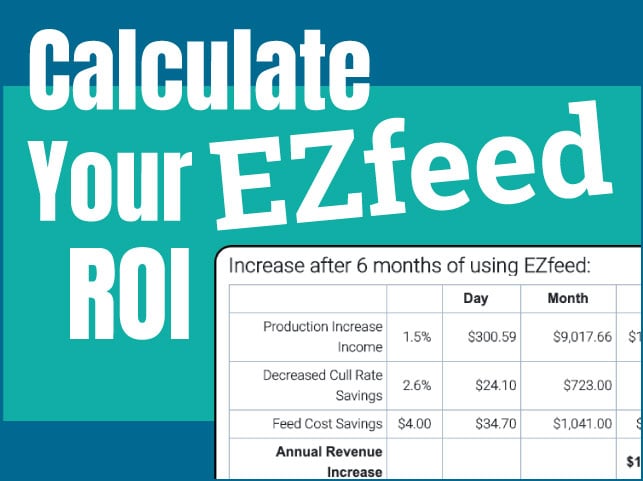 To create a better picture of how EZfeed software helps dairy operations, we followed 14 dairies who were testing with their local DHIA. We collected the data for six months before installing EZfeed to establish a basis for comparison. After installation, the herds were followed for six months to examine the change in herd performance.

In our experience, most dairies that are keeping track of their feed expenses notice an immediate change in feed savings. However, in this study because we were following DHIA testing, we wanted to look at the rolling herd average (RHA) milk production. The milk production results are interesting because the most notable changes occurred during the second and third months after installation.

Before talking about the milk production results I said that most dairies notice an immediate feed expense savings. However, the long-term results associated with herd health are really what makes EZfeed users profitable.

The reason the milk production increase is interesting is because of how it increases overtime. The fact that the results weren't immediate shows that the cows are adapting to better management practices. In addition to milk production, we really didn't want to stop until we studied the health benefits of the software.

To measure the health benefits in such a short period of time we decided to look at cull rate. If the farms were experiencing a reduced cull rate, that should be an indicator of a healthier herd.

As with milk production, each herd was followed for 6 months before the EZfeed installation to determine the current cull rates. The results were similar to milk production in that the noticeable difference began after the second month.

Cull rate is nice because it's easily measured - just like milk production. We can determine exactly how much a dairy saves by plugging in replacements costs.

However, there is more to the story that isn't measured as easily without following the herd for longer periods of time. What about the hidden costs of treating sick cows, dumped milk, extra labor, and decreased reproductive efficiency? The costs go much further than simply the replacement costs for cull cows!

Clearly the herds using EZfeed software substantially increased their milk production and decreased their cull rate. However, I'd like to break down the potential returns because of purchasing, installing, and using EZfeed.

I'm sure there are other costs we could try and incorporate into this study as well to increase the potential revenue, such as the hidden costs mentioned above. However, to make it interesting, I'm only going to focus on how fast you can pay for EZfeed based on increasing milk production, a decreased cull rate, and since everyone reports saving money on feed, I'll add in a conservative feed savings. To do this, I'll use a hypothetical herd based on the average 1,735 cows from our case study.

Let's take a look at a hypothetical herd using the numbers from our sample group.

Production data for the 1,735 cow herd factored by day, month, and year:

To complete the analysis, we'll assume a modest production increase of 1.5% and a cull rate decline of 2.6%. In addition most of our dairies have reported feed savings of at least .5% to 2%, so we'll include a conservative feed savings of .5%.

Increase after 6 months of using EZfeed:

Using those production numbers we can add a very generic estimate of an EZfeed system including a new EZfeed tablet to calculate return on investment. Note - The EZfeed system estimate below is for a typical 1 mixer dairy, but it's best to get a quote for the software based on your needs - just ask!

I'm not saying that your immediate returns are going to be over a hundred thousand dollars and that you will always be able to pay for the investment in a couple of months... I will say that we have a lot of farms that get on EZfeed and enjoy similar results.

But, just so you can more easily visualize what EZfeed can help you achieve, I've put together a spreadsheet with the same numbers and calculations used above as well as an instruction sheet so you know how to use it. Do you want to see what it would take to get these results? Download the spreadsheet below or talk to an EZfeed customer representative today!

Do you want to plug in your own numbers and evaluate your own ROI?

How much water should a cow drink every day?